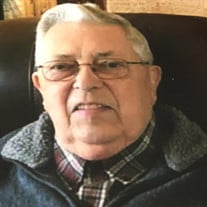 Alva "Al" H. Allen, 80, of Huntley passed away Friday evening, August 7, 2020, in his home with his family by his side. He was born April 7, 1940, in Woodstock the son of Harry Alva and Iva Mae (Fulton) Allen. Al was a member of the 1958 Class of Woodstock High School. He served as FFA President his senior year. Al completed 2 years of business school at Elgin Community College. On October 3, 1962, he married Joyce Carolyn Drendel at the St. Mary Catholic Church in Huntley. Al and Joyce made their home south of Huntley. He enjoyed raising Welsh ponies and Sundays you could find him taking his family to town by pony and cart. Al started work at 16 for National Foods, he worked his way to regional manager opening many new grocery stores in the Midwest. He and Joyce opened the Huntley Supermarket in 1974. The business expanded into a new building on March 3, 1992. He retired from the grocery business in 2004 and started a new career working for School Dist. #158 driving school bus. He had fond memories of starting busing at 4 am on wintry days. He retired from the school district in 2017. Al also drove for Deans foods and worked at Home Depot part time. He enjoyed tractors, trucks, and cars. Any trip could be interrupted by stopping to look at tractors found along the way. Al loved traveling with Joyce and friends, enjoying Hawaii, Alaska, Spain, Jamaica, Mexico, and the Caribbean. He was a member of St. Mary Catholic Church in Huntley, the Altar and Rosary Society, the American Legion for 46 years, Huntley Lions since 1974, Harvard Moose since 1981, and a volunteer with the Huntley Fire Dept. from 1974-1994, serving on the trustee board from 1991-1995. Al was a devoted husband, father, and grandfather. He was a friend to all and will be missed. Surviving are his wife of 57 years, Joyce; 3 children and their families, Kenneth of Marengo, Leonard of Marengo (Brandon, Caitlyn, and Jordyn), Catherine (Timothy) Ruetten of Sycamore (Nathan, Jason (Nicole), Bradley, David, and Paul); sisters, Shirley (the late Roy) Jackson, Eva (the late Ray) Priegnitz. He is preceded in death by his parents; brother, Ray; sisters, Norma (Donald) Madsen, and Pearl (Harold) Borhart. A Mass of Christian Burial will be at 10 AM Thursday, August 13, at St. Mary Catholic Church, 10307 Dundee Rd., Huntley. There will be no visitation at church, please seat yourself when you arrive. Burial will follow in the St. Mary Cemetery. Visitation will be on Wednesday, August 12 from 4 to 8 PM at James A. O'Connor Funeral Home, 11603 E. Main St., Huntley. Masks and social distancing will be required. Memorials in his name may be directed to James A. O'Connor FH, PO Box 74, Huntley, IL 60142 to be distributed to Al's favorite charities.

The family of Alva "Al" H. Allen created this Life Tributes page to make it easy to share your memories.

Send flowers to the Allen family.