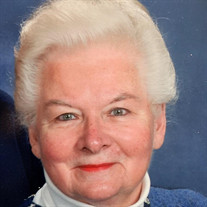 Bernice E. Conley, 85, of Union, passed away Monday morning, April 18, 2022, at JourneyCare Hospice in Barrington. She was born June 8, 1936, in Evanston the daughter of Carl J. and Florence (Lundin) Nelson. Bernice married Ralph Conley on June 23, 1956, in Wilmette and they resided in Wauconda for 25 years before moving to Union in 1984. She loved traveling, especially trips with Ralph to Europe and visiting her family in Sweden. She was a longtime member of Sacred Heart Church parish in Marengo. She is survived by her children, Robert (Miga) Conley of Houston, TX, Steven Robin Conley of McHenry, Colleen Conley of Fox Lake, and Daniel Conley of McHenry; 6 grandchildren; and 10 great-grandchildren. She is preceded in death by her parents; husband, Ralph L. Conley on Aug. 9, 2014; two grandsons, Jeremy & Jaccob Conley. Mass of Christian Burial will be celebrated at 10:30 AM on Monday, April 25, 2022, at Sacred Heart Catholic Church, 323 N. Taylor St. in Marengo. Burial will follow in the church cemetery. Visitation will be on Sunday, April 24 from 1 to 5 PM at the James A. O’Connor Funeral Home, 11603 E. Main St. in Huntley and will continue Monday at the church prior to mass from 9:30 to10:30. Masses or Memorials in Bernice’s name may be directed to the Sacred Heart Catholic Church.

The family of Bernice E. Conley created this Life Tributes page to make it easy to share your memories.

Send flowers to the Conley family.