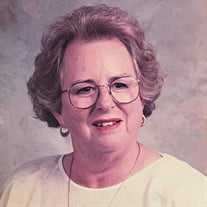 Carol Jean Bastian passed from this life into the Grace of her Lord on August 16, 2021, at Norman Regional Medical Center Norman OK. She died from complications of Covid infection despite immunization. Carol was born October 21, 1927, in Waterloo, Iowa to Mark and Edna Petersen. During World War 2 she lived In Minneapolis MN before returning to Waterloo and attending Allen Memorial School of Nursing. While a student she studied at Cook County Hospital in Chicago where she met her husband Elmer “Bud” Bastian. After her graduation, they married. She left nursing to raise their four children but returned to her career in 1966. She worked at Memorial Hospital in Woodstock, IL and retired as Associate Director of Nursing in 1984. She and Bud then had seven wonderful years of retirement enjoying travel and golf until his death in 1991. She then sold her home in Union, IL and moved to Norman OK to be closer to her daughter and her grandchildren. Over the years she made many friends in Norman through her involvement with her neighbors, church, quilting, golf, and her passion for bridge. She loved Norman telling all that “This is my home”. She was a member of Trinity Lutheran Church and for many years helped to create a handsewn quilt which was presented to each vicar at the end of his term as a remembrance of his time at Trinity. She was preceded in death by her parents and older brother Keith Petersen. She is survived by her brother, Bruce Petersen (Bonnie), her 4 children, John Bastian MD (Mary), Craig Bastian (Lynne), Kurt Bastian (Mary) and Claudia Scott: 8 grandchildren, Jennifer Thornhill (Barrett), Jean Niehaus (Brian), Alex Bastian (Noah), Hannah Bastian, Kathleen Scott, DVM, Caroline Scott, Lauren Maas (Justin) and Erin Bastian; and 6 great-grandchildren. A memorial service to honor her life was held on October 9, 2021, at Trinity Lutheran Church, 603 Classen Blvd, Norman and was attended by her friends and family. Inurnment of ashes will be held on Wednesday, November 10, 2021 at 1:00 PM at Huntley Cemetery in Huntley, IL.

Carol Jean Bastian passed from this life into the Grace of her Lord on August 16, 2021, at Norman Regional Medical Center Norman OK. She died from complications of Covid infection despite immunization. Carol was born October 21, 1927, in... View Obituary & Service Information

The family of Carol Jean Bastian created this Life Tributes page to make it easy to share your memories.

Carol Jean Bastian passed from this life into the Grace of her...

Send flowers to the Bastian family.