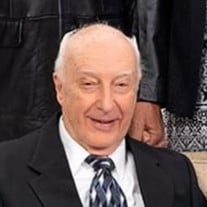 David A. Perkins, 90, of Woodstock passed away Friday, March 4, 2022, at Sherman Hospital in Elgin. He was born Oct. 1, 1931, in Chicago, the son of Paul and Florence (Peterson) Perkins. David graduated from Webster Groves High School in Missouri, after attending Washington and Lee High School in Arlington, VA for three years. He then joined the U.S. Air Force rising to the rank of Staff Sargent and becoming crew chief of the squadron’s T-33 aircraft. In later years, if you asked him his name he would say Perkins, David A., just as it was embossed on his dog tags. He married Shirley Hagler on March 31, 1953, in Webster Groves, MO. David was an aircraft and engine mechanic for 39 years with United Airlines. He enjoyed attending Retirement United Airlines Employees Association conventions at various locations and air shows with his sons and friends from United Airlines. David spent many hours assembling plastic model airplanes. David loved the various cars he owned through the years and was always sure to have his picture taken with each one in the driveway. He enjoyed attending his sons various Little League and high school sporting events. He was an avid Chicago Bears fan and loved to work in his vegetable garden. He was good at fixing things, a trait he passed on; even his children and granddaughter Shannon exhibit an innate ability to fix what is broken—thanks dad! He loved history and was an avid reader of WWII novels and magazines. During COVID David and his daughter Valerie read several WWII books. David had a great sense of humor; when he wanted to wake the whole household, he would put on a recording of Victory at Sea at maximum volume. He is survived by his loving wife of 69 years, Shirley; three children, Dale (Carol) Perkins, Valerie (Chuck) Seyersdahl, Glen (Gilda) Perkins; grandchildren, Lisa, Kelly, Kate, Shannon; great-granddaughter, Mikayla; and nephew, John (Mary) Perkins. He is preceded in death by his parents; and his brother, John Perkins. Visitation will be held on Wednesday, March 9 from 3 to 6 PM at the James A. O’Connor Funeral Home, 11603 E. Main St. in Huntley. Private burial will be at Irving Park Cemetery in Chicago. Memorial contributions in David’s name may be made to Wounded Warriors at https://secure.uso.org or Calvary Baptist Church, 551 Arlington Ave., Elgin, IL 60120.

David A. Perkins, 90, of Woodstock passed away Friday, March 4, 2022, at Sherman Hospital in Elgin. He was born Oct. 1, 1931, in Chicago, the son of Paul and Florence (Peterson) Perkins. David graduated from Webster Groves High School in Missouri,... View Obituary & Service Information

The family of David A. Perkins created this Life Tributes page to make it easy to share your memories.

David A. Perkins, 90, of Woodstock passed away Friday, March...

Send flowers to the Perkins family.