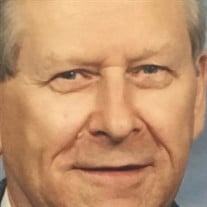 Edward Joseph Barnas, 81, of Huntley passed away Thursday, October 18, 2018. He was born on February 25, 1937 in Chicago the son of Frank J. and Bernice Barnas. Ed graduated from DePaul University on August 6, 1960 with a Bachelor of Science Degree in Commerce. Ed worked for Liberty Mutual as a Forensics Auditor, as well as having a private accounting practice. On June 14, 1958 Ed married the love of his life, Luci Grzesik. They shared 60 beautiful years together. Their golden years were spent at Del Webb Community in Huntley, IL enjoying neighborhood activities with many close friends. Ed especially loved softball and neighborhood flamingos. Ed was a loving husband, father, grandfather, and great-grandfather. Ed’s greatest joy in life was his family. His beautiful devotion to Luci his wife demonstrated to his children and grandchildren what a loving relationship truly is. As a father, Ed loved his children unconditionally. He was supportive and loving through good times or bad. Ed delighted in indulging his grandchildren and great-grandchildren. He experienced as much pleasure from his acts of giving as the child received from his gifts or attention. Surviving are his wife, Luci; children, Elaine (Terrence) Moore, Elizabeth McBride, Gary Barnas; grandchildren, Jessica (Ben) Stevens, Deanne (David) Ferguson, Dustin (Desi) Moore, Rebecca McBride, Danielle (Jeff) Palicki, Joel Barnas, Tyler Barnas; great-grandchildren, Blake Stukins, Dylan Stukins, Jackson Stevens, Arya Ferguson, Alexander Ferguson, and Ardalia Moore. He was preceded in death by his parents; and brother, Eugene F. Barnas. The Mass of Christian Burial will be at 10 am Thursday, October 25 at St. Mary Catholic Church, 10307 Dundee Rd., Huntley. Burial with a chapel service will follow at Maryhill Cemetery in Niles. Visitation will be on Wednesday, October 24 from 3 to 8 pm with a wake service at 7:30 pm at the James A. O’Connor Funeral Home, 11603 E. Main St., Huntley. Visitation will continue prior to mass on Thursday at the church from 9-10 am.

Edward Joseph Barnas, 81, of Huntley passed away Thursday, October 18, 2018. He was born on February 25, 1937 in Chicago the son of Frank J. and Bernice Barnas. Ed graduated from DePaul University on August 6, 1960 with a Bachelor of Science... View Obituary & Service Information

The family of Edward Joseph Barnas created this Life Tributes page to make it easy to share your memories.

Send flowers to the Barnas family.