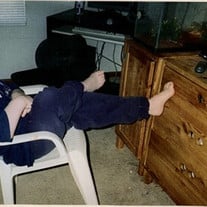 Francis Christopher Bonilla-Wier, aka Frankie, age 13 of Lake in the Hills, IL, died Saturday, February 15, 2014.  Frankie was born on March 29, 2000, in Elgin, Illinois, the son of Thomas and Blanca Wier (nee Bonilla). He was a member of St. Mary's Catholic Church in Huntley.  Frankie was a student at SEDOM School in Woodstock, Illinois.  Frankie was in the 8th grade and was slated to graduate this year.  He participated in many activities including several play productions at the Woodstock Opera House.  He participated in therapeutic horse riding for many years.  He enjoyed many activities including swimming and riding his bike and was a true foodie.  Frankie was a pioneer as being one of the first patients in Chicago to receive break-through enzyme replacement therapy as a stepping stone to a possible cure for Hunter Syndrome.  His family includes:  Mother - Blanca Wier (nee Bonilla) and Father - Thomas G. Wier, Jr., and is Cherished and loved by brothers Nicholas, Joseph and Michael;  Maternal Grandparents Carmelo and Teresa Bonilla; Paternal Grandparents  Thomas G. Wier, Sr and Dorothy Wier Monson.  He is survived by many aunts, uncles, cousins, and dear friends.  Franky is in Heaven with recently departed and most beloved Uncle Lance Intveld.  He was comforted during his last moments by many including Auntie Carmen, Auntie Maria, Auntie Ida, Auntie Zory, Uncle Pito, Auntie Lisa, Auntie Nancy, Uncle Larry Bronsberg, cousin Lisa and Jessica Medina, Grandpa Clarence and Grandma Dorothy.  Visitation:  To be held on Thursday, February 20, 2014 from 12 p.m. to 8 p.m. at the James O'Connor Funeral Home, located at 11603 E. Main Street , Huntley, Illinois.  Funeral Mass:  Visitation will resume on Friday at St. Mary's Church at 10307 Dundee Road, Huntley Illinois from 9:30 to 10:30 to be followed by a memorial mass starting at 10:30 a.m.  A funeral procession for eternal rest will begin after the memorial mass to St. Charles Borromeo Catholic Cemetery in Hampshire, Illinois.  In lieu of flowers, memorial contributions may be made to the National MPS Society at P.O. Box 14686, Durham, NC 27709-4686.

Francis Christopher Bonilla-Wier, aka Frankie, age 13 of Lake in the Hills, IL, died Saturday, February 15, 2014.  Frankie was born on March 29, 2000, in Elgin, Illinois, the son of Thomas and Blanca Wier (nee Bonilla). He was a member of St.... View Obituary & Service Information

The family of Francis "Frankie" Christopher Bonilla-Wier created this Life Tributes page to make it easy to share your memories.