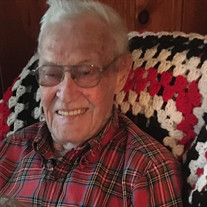 George “Geo” Fruin, 92, of Huntley passed away Friday, Jan. 7, 2022, at his home. He was born December 18, 1929, in Sherry, WI, the son of Lloyd and Theresa (Lobner) Fruin. George peacefully passed away at his home where he and his late wife Marion lived on their family farm in Huntley since March of 1964. They switched from milking cows to raising beef cattle in 1987. George would often be seen on his Massey Ferguson tractors busy in the field. Many friends and family would often come out to their farm to enjoy the country and their pool, and many card games were played. George was such a gentle soul. Soft spoken, never raised his voice, generous, helpful, patient, and always enjoyed a good laugh. He pronounced people’s names his own way, or sometimes gave them a new name. Hard working, he always figured out a way to make a situation work, however it might not have been a long-term fix with his duct tape and twine string hence, there were a few cows out every once in a while. He was loving, sensitive, and had a memory that couldn’t be beat. George enjoyed his bowl of Wheaties, two eggs over easy and toast every morning, skipped lunch, but had his Snickers in his pocket. His dinner would usually include meat, potatoes and gravy. He loved his sweets too. In the spring and fall George would often be helping his two sons Dan and Ross delivering seed and fuel to the farms they were farming. George made several trips to Buck Bros, and Farm and Fleet including this past fall. He was a terrific help to them. His two daughters, Sylvia and Becky went on to having dairy farms of their own. Their two sons, Brent and Craig still carry on this tradition which made him very proud. George was very helpful to his grandchildren and great grandchildren often helping them at the county fair with their 4-H animals. George would offer his farm for many 4-H kids to raise their animals. His grandchildren and great grandchildren adored him and loved coming to see him at his farm. He always welcomed them with a big smile and open arms. Back in his younger years George enjoyed going to Las Vegas for card tournaments. He also made many trips to Wisconsin to see his many relatives, occasionally his car would make a detour to Ho Chunk casino on the way. He was actively playing cards several days a week up until his passing. His family and friends truly loved him. His big smile, sweet grin and loving laugh will truly be missed. George was a faithful member of Sacred Heart Catholic Church in Marengo. Family finds comfort knowing he is reunited with Marion his son Roger and Grandson Grant and so many beloved others. There will be a celebration of life for Marion and Geo at Ross and Carol’s home on July 30th. He is survived by his four children, Dan (Sue) Fruin, Sylvia (Ron) Mueller, Becky Fruin, and Ross (Carol) Fruin; 12 grandchildren, Matt (Jodi), Nathen (Samantha), Kate (Adam), Brent (Amber) Brian (Crystal), Scott (Sarah), Bradley (Jenna) Aaron (Natalie), Tonya (Brian), Craig (Bria), Hayden (Kenzie), and Emilie (Jeremiah); 25 great-grandchildren; brother, Lloyd Fruin; sisters, Ethel Passer, Marlene Furo, and Pat Stuehler; and many nieces, nephews, and good friends. He is preceded in death by his parents; his wife, Marion on September 21, 2021; son, Roger, grandson, Grant Fruin; brother, Bill; sisters, Sally Swetz, and Marie Stroosma. Visitation and Services will be private for the family, but you can livestream the service on Tuesday, Jan. 11th at 11 AM by clicking on the link of photos and videos at 11 AM and then play George Fruin Service. In lieu of flowers, memorials in George’s name may be directed to Transitions Hospice, 12040 Raymond Ct., Huntley, IL 60142

The family of George J. "Geo" Fruin created this Life Tributes page to make it easy to share your memories.

Send flowers to the Fruin family.