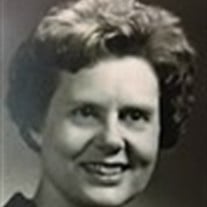 Helen Elizabeth (Harrison) Marlowe,100, of Huntley passed away March 3, 2017.    Helen was born December 8, 1916 to Myrtle and C.L. Harrison at the family farm in Ringwood, Il.  She graduated fromMcHenryHigh Schooland was the first everMcHenryCountydelegate to the National 4-H Conference inWashington,D.C.  She attended the American Conservatory of Music inChicagoas a student of music performance in trumpet, French horn and marimba.  In 1935 she marriedHuntleyHigh Schoolagriculture teacher Henry Marlowe and together they established Marlowe Feed and Hatchery.  After his passing in 1984 Helen stepped in without hesitation and operated the business for the benefit of area farm families until 1998. Helen was an active musician, organist and member of the Huntley Congregational Church.  She co-founded and developed a hand bell choir program for children, teens and adults which she instructed and directed for 42 years.  In addition, she was a major donor to the church music program and was instrumental in the acquisition and installation of the pipe organ at the Congregational Church along with the eight octaves of English made hand bells. In 1970, in conjunction with the White House Conference on Aging, she was appointed Chairperson of the McHenry County Project on the needs of the elderly.   This was the forerunner of today's senior citizen's programs and a three-year project to spur action by federal, state and local governments to address the needs of senior citizens.  Helen is fondly remembered as a very enthusiastic and creative 4-H leader working with young women for over 20 years.  She also served as a member of the Board of Directors at the State Bank of Huntley. Helen was a dedicated and loving wife, mother and grandmother to her every increasing family.  She is survived by four children; Elizabeth Ann (George) Buchal, of Waterford, WI, Lyle (Mary) Marlowe of Spring Lake, NJ, Dean (Marge) Marlowe, of Hampshire, IL, and Faye Marlowe of Bartlesville, OK; grandchildren, Craig, Julie and Terri Marlowe, Michael Buchal and Carilu Buchal Robinson, Patrick and Christopher Marlowe, Bonnie Olson, Brian Marlowe, Carol Fiandalo, Marlowe Holden and Taylor Holden; 14 great grandchildren; 1 great-great granddaughter; and sister, Carol Donahue of Huntley. She was predeceased by her husband, Henry Marlowe; son, Byron Marlowe; sister, Amy Brener; brothers, Frank, and Alvin Harrison; and a baby brother.  Visitation will be on Friday, March 10 at the First Congregational Church, 11628 E. Main Street in Huntley from 3-7pm. Services are private. Private Interment will be in the Carr-Harrison Cemetery in Ringwood. Memorials in her name may be directed to First Congregational Church Hand Bell Choir, or to Marlowe Middle School Music Dept. c/o James A. O'Connor Funeral Home, P.O. Box 74, Huntley, Il 60142-0074.

Helen Elizabeth (Harrison) Marlowe,100, of Huntley passed away March 3, 2017.    Helen was born December 8, 1916 to Myrtle and C.L. Harrison at the family farm in Ringwood, Il.  She graduated fromMcHenryHigh Schooland was the first everMcHenryCountydelegate to... View Obituary & Service Information

The family of Helen E. Marlowe created this Life Tributes page to make it easy to share your memories.