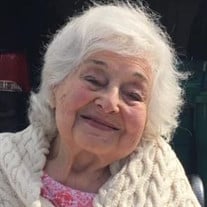 Helen Wala (nee Lucas) Helen&#8217;s journey out of this world began in earnest this past March and ended on May 22nd, 2019, when she passed away peacefully at home. &#8220;Journey&#8221; might be the defining word for a life that spanned three... View Obituary & Service Information

The family of Helen Wala created this Life Tributes page to make it easy to share your memories.

Send flowers to the Wala family.