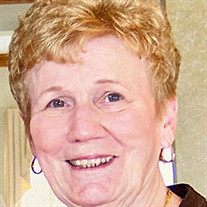 Irene M. Niemaszek (Nee Gorzny), 89, of Orland Park, Illinois entered eternal life peacefully on Sunday morning, March 6, 2022, at Village Glen Memory Center in Lake Geneva, Wisconsin. She was born March 22, 1932, in Chicago the daughter of John and Marie (Nowakowski) Gorzny. She was the beloved wife of the late Julius Skoflanc, and Chester Niemaszek; loving and devoted mother to the late, Gail (John) Paulius; and Garry Skoflanc. She is survived by her son, Mark (Patti) Niemaszek; five grandchildren, Lauren Paulius, Katie (Darek) Rusnarczyk, 1LT Patrick, Jack, and Brian Niemaszek. Dear sister to the late Adeline (late Stanley) Lazinek, late Theresa (Edward) Studzinski, Charlotte (Late Edward) Krope, Nancy (Late Thomas) Piekarski. Fond Aunt of many Nieces and Nephews. Irene was an exceptional wife and mother. She cared deeply for her family and friends and did this not out of obligation, but because of who she was. Irene was a central figure in the lives of everyone she met and was always the one to offer help. As a mother, Irene’s children were her life and she had a broken heart when her daughter and son died two years apart. The last part of her life was spent in an assisted living atmosphere and she was the life of every activity. Irene will be missed for dedication to her family, quick wit and fun-loving nature. Her family grieves her loss, but take comfort knowing that she is in the loving arms of Jesus and has reunited with her husband, son Garry and daughter Gail for all of eternity. Mass of Christian Burial will be at 10 AM on Thursday, March 10, at St. Mary Catholic Church, 10307 Dundee Rd. in Huntley. Burial will be on Friday at St. Mary Cemetery in Evergreen Park. Visitation will be prior to mass at the church from 9 – 10 AM. In lieu of flowers, memorials in Irene’s name may be directed to St. Jude Children’s Hospital at www.stjude.org

The family of Irene M. Niemaszek created this Life Tributes page to make it easy to share your memories.

Send flowers to the Niemaszek family.