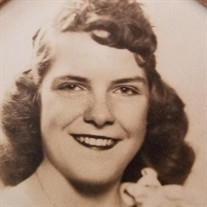 Joan E. Thompson, 93, of Huntley, IL passed away Thursday, October 8, 2020, in Huntley surrounded by family. Joan was born on December 18, 1926, in Chicago, IL, the daughter of Victor and Hazel (Starkweather) Thiele. She married Raymond G. Thompson on November 22, 1947, in Chicago. They lived in Chicago until moving to Huntley in 2002. Joan was the bookkeeper for 1st Church of Christ Scientist in Chicago until 2007 and later became a member of the Christian Science Church in Crystal Lake. She loved to sew and was an avid collector of dolls and bells. Joan was a member of the Prairie Singers and Sew n Sews. Surviving are her children, Bruce (Lynn), Deborah (Joff) Simmons and David (Mary); grandchildren, Eric (Renee) Thompson, Amy (Matt) Goldstein, Tobit (Thia) Simmons, Tanna-Marie (Peter) Inman, Joanna (Peter) Russo, Jonathan (Bailey) Simmons, Matthew Thompson, Stephanie (Brad) Pearson, Timothy (Brooke) Thompson, Camden Thompson; and 11 great-grandchildren. Joan was preceded in death by her parents; and her husband, Raymond who passed in 2010. Memorial service to be arranged at a later date.

The family of Joan E, Thompson created this Life Tributes page to make it easy to share your memories.

Send flowers to the Thompson family.