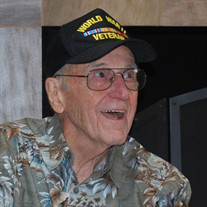 Leon J. Urben, 93, passed away Thursday, August 20, 2020. Fiercely independent, he lived in his own home in Huntley, IL until only his final days. He was born August 21, 1926, in New Glarus, WI, the son of Jacob S. & Ottillie K. (Stuessy) Urben. Leon was raised in the small swiss town of New Glarus, WI and had three siblings: Evelyn Eckstam, Hazel Urben, and Jeanette Gaffield. He was an Eagle Scout and a starting player on the New Glarus High School basketball team. At age 18, he volunteered for the Navy and spent 20 weeks at the Navy’s radio training school on the University of Wisconsin campus. He served nearly two years during WWII where part of this time was spent upon ships in the Pacific theater. Later in life, Leon was celebrated as part of the Honor Flight Program where he was flown to Washington, DC and received by cheering crowds. Leon attended the University of Wisconsin, Madison earning his engineering degree. He married his lifelong neighbor and classmate, Dorothy M. Engler, just prior to his senior year to whom he credits his much-improved college GPA! Shortly after graduation when Dorothy’s father, William Engler Jr., unexpectedly passed, Leon came home to New Glarus to help his mother-in-law, Clara Engler, manage Engler’s General Store until its doors ultimately closed three years later. He then returned to his career in engineering and for Dorothy, hers in education. Leon spent the majority of his career at the National Safety Council, as a Manager in the Council’s Farm Safety Department. Leon and Dorothy raised six children together in the town of Wheaton, IL where they developed close friendships with congregation members at St. Matthew’s United Church of Christ and in the neighborhood. Favorite times included hosting their annual 4th of July parade party on their front lawn, family vacations on Washington Island, WI and singing in the church choir. Leon always had a project and could design and create anything in his basement workshop. He continued to grow and challenge himself into retirement and beyond. He developed a life on the theatre stage in his 80’s and discovered sculpting and chalk drawing, which he pursued into his 90’s. Leon was a devoted husband to Dorothy, together sharing almost 64 years of marriage before she passed away in 2013. To all who knew Leon, he will be remembered as a man of great integrity, sharp mind, steadfast commitment, and loving presence. The family is comforted knowing he joined Dorothy just in time for their wedding anniversary on the 21st. Dorothy would often joke that she purposely chose that date for their wedding because she knew he would never forget their anniversary if it was on his birthday! Leon is survived by his youngest sister, Jeanette (Tom) Gaffield; his six loving children, Mark (Tracy) Urben, Eric (Brenda) Urben, Bruce (Angie) Urben, Daniel (Leesa) Urben, Lisa Urben, and Stacy (James) Rechtin; 14 cherished grandchildren; five precious great grandchildren; three dear nephews; and two special nieces. He is prececeded in death by his parents; wife, Dorothy on April 23, 2013; and two sisters, Evelyn, and Hazel. Services and inurnment will be Sunday, September 6 at 11:00 AM in New Glarus Cemetery in New Glarus, WI followed by Naval Military Honors. In lieu of flowers, memorial contributions in his name may be directed to Honor Flight Chicago, 9701 W Higgins Road, Suite 310, Rosemont, IL 60018 773-227-8387 honorflightchicago.org.

The family of Leon Jacob Urben created this Life Tributes page to make it easy to share your memories.

Send flowers to the Urben family.