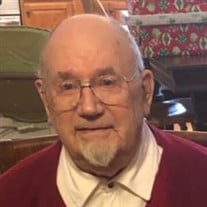 Norman Charles “Norm” Brettschneider, 87, of Huntley, passed away Monday, February 1, 2022, at his home in Huntley. He was born August 11, 1934, in Elgin the son of Henry and Clara (Kasten) Brettschneider. He was a member of the 1952 Class of Dundee High School. On January 22, 1955, he married Phyllis Schuring in Dundee. Norm was a mason bricklayer for Paul Larsen, and then worked for Standard Oil Co. retiring in December of 1992. He was a 45-year member of the Huntley Lions Club, served 2 terms on the Dist. 158 School Board, and a bell ringer at St. Peter Evangelical Lutheran Church. Norm loved sports, refereeing basketball, coaching baseball, golfing, and bowling. He is survived by his wife of 67 years, Phyllis; three children, Mark (Linda), Lynette (Don) Schiesher, and Barbara (Chuck) Cosenza; grandchildren, Collin (Ashley), Austin (Kendall) Brettschneider, Logan Brettschneider, Courtney (Alan) Urban, Mallory (Chas) Kennedy, and Samantha (Matthew) White; seven great-grandchildren with one on the way; and several extended family and friends. He is preceded in death by his parents; infant daughter, Kathleen; granddaughter, Tracy; brothers and sisters, Ken, Ellen, Donald, and Melva. Funeral Services will be at 10:30 AM on Thursday, Feb. 10 at St. Peter Evangelical Lutheran Church, 18N377 Galligan Road, Dundee. Burial will be in the Lakewood Memorial Park Cemetery in Elgin. Visitation will be at the church prior to services from 9 to 10:30 AM. In lieu of flowers, memorials in Norm’s name may be directed to St. Peter’s Lutheran Church.

The family of Norman C. "Norm" Brettschneider created this Life Tributes page to make it easy to share your memories.

Send flowers to the Brettschneider family.