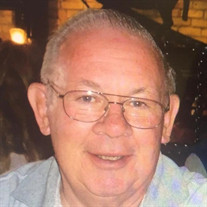 Richard H. “Dick” Erath, 82, of Huntley passed away Saturday, March 19, 2022, at home with his family at his side. He was born July 15, 1939, in Owatonna, MN the son of Albert and Fern (Roudebush) Erath. Dick was a proud U.S. Army veteran serving from 1957 to 1959. He married Janet Ball on February 10, 1962, in Huntley. Dick was a lifelong resident of Huntley and worked at Union Special for 37 years as the Warehouse Manager. He dedicated many years to youth baseball in Huntley and was an avid White Sox fan. He will be deeply missed by his family. He is survived by his wife of 60 years, Janet; his three sons, Dale (Missy), Daniel, and David (Tina); 7 grandchildren, Darren (Nikki Tsiveriotis) Maddie, Dilan, Austin, Brandon, Haley (Nicholas) Neukom, and Paige; three great-grandchildren, Annabella, Noah, and Lillian; and half-brother, James (Sharon) Erath. He is preceded in death by his parents. Visitation will be from 1-5 PM on Friday, March 25 at the James A. O’Connor Funeral Home, 11603 E. Main St. in Huntley. In lieu of flowers, memorials in Dick’s name be directed to St. Jude Children’s Hospital at www.stjude.org.

The family of Richard H. "Dick" Erath created this Life Tributes page to make it easy to share your memories.

Send flowers to the Erath family.