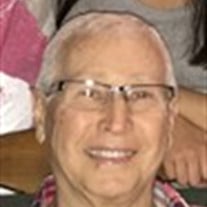 Richard L Zimmerman, 72, of Wisconsin, formerly of Huntley passed away early Friday morning, Feb. 10, 2017 at Loyola Hospital in Maywood with his family by his side. He was born Oct. 2, 1944 in Woodstock the son of Norman and Viola (Kolberg) Zimmerman. He was a proud veteran of the U.S. Navy. On Oct. 22, 1966, he married Sheila Ule in Huntley.  Richard was a family man through and through.  He loved his wife, children, and grandchildren with all of his heart.  Rich and Sheila had recently retired to Lake Arrowhead in Wisconsin, finally getting his dream home on the lake.  He enjoyed drinking his morning coffee overlooking the lake, fishing and golfing with his sons and friends, and spending his winters in the Florida sunshine.  Rich was always a hardworking man.  He started working for the family business, D & Z Transfer, after returning from active duty in the Navy in 1966.  He continued for 33 years, eventually becoming President of the company and then moving on to become a Local 150 Operating Engineer.  He will be missed everyday by all of those who knew him.  Surviving are his wife of 50 yrs., Sheila; children, Scott (Laura), Lance (Linda), Stacy (Thad) Zimmerman Ferrell; grandchildren, Scott Jr., Brittany, and Autumn Marie Zimmerman, Wally, and Hazel Ferrell; brothers and sisters, Jerry (Marilyn), Sandy (Robert) Zanzig, Randy (Lynn), Pam (Gary) Gallaugher; and many nieces and nephews. He was preceded in death by his parents. A Memorial Service will be held on Sat., Feb. 18, 2017 at 1 pm at Trinity Lutheran Church, 11008 N. Church St. in Huntley. Inurnment with Military Honors will be in the McHenry Co. Memorial Park Cemetery in Woodstock. Visitation will be prior to services at the church from 10 - 1pm. In lieu of flowers, memorials in his name may be directed to the Leukemia Research Foundation, www.allbloodcancers.org/donate

Richard L Zimmerman, 72, of Wisconsin, formerly of Huntley passed away early Friday morning, Feb. 10, 2017 at Loyola Hospital in Maywood with his family by his side. He was born Oct. 2, 1944 in Woodstock the son of Norman and Viola (Kolberg)... View Obituary & Service Information

The family of Richard L. Zimmerman created this Life Tributes page to make it easy to share your memories.