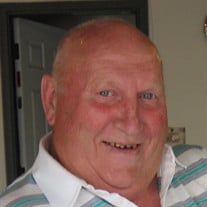 Richard R “Dick” Rath, 86, of Union passed away peacefully at Fair Oaks Care Facility in Crystal Lake, Illinois with his two daughters by his side. Dick was born in Dundee Township June 15, 1934, to John F and Minnie (Holtz) Rath. He grew up in Gilberts In 1969 he married Carolyn Schuman. He began his farming career at an early age of 11 helping on local farms. As he grew into a young man he continued working as a farm hand graduating from Dundee High School 1952. Working full time on a farm west of Elgin, he married and started a family while he continued to hone his skills as a dairyman. In 1958 Dick took the job as manager of the Bel Terra Ayrshire Farm east of Elgin, what is now considered Streamwood area. There his knowledge and experience started producing higher production records with the herd. But as the urban sprawl continued to march west from Chicago gobbling up farmland. In 1963 the farm was sold and the herd dispersed. It was then, that Dick was recruited to manage the Mar-Ral Registered Ayrshire farm near Algonquin. In the following years with Dick’s skills in dairy production, he led Mar-Ral farm into the national spotlight, setting production records for the Ayrshire breed in many age classes at that time. Several emerging AI companies sought out bulls from these high production cows. He was well known in the Ayrshire breed community as a world class dairyman. Not everything was great as Dick divorced in 1966. Dick continued at the Mar-Ral Farm setting records through the 1960s. In 1969 Dick fell in love again and married Carolyn Schuman. As the decade closed “Richard” as Carolyn always called him, felt that they could do for themselves what he had done for others and set out to have their own farm. They landed near McHenry on a farm in a shared/partnership with the landowner. They had a hard road, but with Richard’s dairy management experience and Carolyn’s business knowledge they began to establish a very respectable Holstein herd. As their herd improved to one of the top herds in the McHenry County area, they wanted more, they wanted to have their own farm. So in 1982 they purchased a farm and left Illinois behind and headed for southwest Wisconsin. Although they worked hard as always, unfortunately, circumstances beyond their control changed their plans. So, in 1986 they returned to Illinois renting a farm near Garden Prairie. They farmed up to late 1990 when the farm was sold. At that time, they decided to call it quits and auctioned of their cattle and equipment. They used some of their free time to travel in the US and Europe. Richard grew a fondness for collecting scale model tractors and equipment. He amassed a collection of nearly 400 tractors. He enjoys going to auctions and garage sales. In early 2010 Carolyn lost her battle to cancer leaving a large void in Richard’s life which was never filled. Dick is survived by his children, Sandra (Henry) Wozniel, Alan (Terri) Rath, Rick (Melissa) Rath, and Sherrie (Ron) Moritz; his Grandchildren, Phillip (Stacy) Wozniel , Joe (Kaely) Rath, David Rath, Mark Moritz, Paige Moritz DVM; and Great Grandchildren, Charlie and Addy Wozniel, Jackson Rath; a sister, Darlene “Snooks” Olson; 2 brothers, Lester “Duke” Rath and Paul Rath; and many nieces,nephews and friends Funeral Services will be at 10 AM on Tuesday, Sept. 29 at St. John’s United Church of Christ, 17824 Jefferson St., Union. Burial will follow in the Union Cemetery. Visitation will be on Monday, Sept. 28 at the church from 4-8 PM and will continue on Tuesday morning from 9-10 am. Social Distancing and masks will be required. In lieu of flowers, memorials in his name may be directed to the church.

Richard R &#8220;Dick&#8221; Rath, 86, of Union passed away peacefully at Fair Oaks Care Facility in Crystal Lake, Illinois with his two daughters by his side. Dick was born in Dundee Township June 15, 1934, to John F and Minnie (Holtz) Rath.... View Obituary & Service Information

The family of Richard R. Rath created this Life Tributes page to make it easy to share your memories.

Richard R “Dick” Rath, 86, of Union passed away peacefully at...

Send flowers to the Rath family.