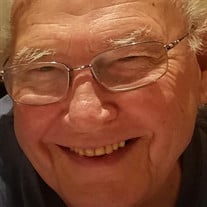 Dr. Ronald F. Fry, DDS, 84, of Huntley, IL passed away Thursday, July 19, 2018 in Huntley. He was born Aug. 21, 1933 in Spokane, WA the son of Don and Margaret Fry. He attended Gonzaga High School where he was a member of the football team and went on to attain his Bachelor’s Degree at Washington State University. As a U.S. Air Force officer, then Lt. Fry served at a radar station on the DEW Line in the Arctic. After leaving active duty he continued serving in the Air Force Reserve, rising to his final rank of Captain. Graduating in 1963 from the Marquette University School of Dentistry, Dr. Fry accepted a 1-year internship at Mt. View Hospital in Tacoma, WA. In 1964 he opened his dental practice in Portland, OR where he practiced dentistry for 32 years and served as Chief of Dental Staff at Woodland Park Hospital. Ron spent significant amounts of his spare time at ice rinks, coaching his son’s hockey team as well as judging and refereeing figure skating. In 1978 he chaired the National Figure Skating Championship held in Portland, OR and then served a 3-year term on the Board of Directors for the United States Figure Skating Association. He enjoyed cooking and was very proud of his private pilot’s license. Ron loved to go on adventures and travelled the world, visiting all 7 continents. And after retirement, he and his wife spent 6 months of each year at their home in Mexico. He was an active member of the Schaumburg Area Photographers Society. As an award-winning photographer, Ron leaves a beautiful history of his life. Surviving are his wife of 60 yrs., Janet; children, Patti Fry, and Michael (Laura) Fry; granddaughters, Dana, Kelly, and Samantha Fry; grandsons, James and Kyle Boston; and sister, Marilyn Clemons. He was preceded in death by his parents. A Memorial Service will be held at 10:30am Saturday, July 28 at the James A. O’Connor Funeral Home, 11603 E. Main St. in Huntley, IL. Burial with Military Honors will follow in the Huntley Cemetery. Memorials in his name may be directed to KB Morgan, PO Box 1905, Venice, FL 34284 to help children in Progreso, Mexico acquire an education.

Dr. Ronald F. Fry, DDS, 84, of Huntley, IL passed away Thursday, July 19, 2018 in Huntley. He was born Aug. 21, 1933 in Spokane, WA the son of Don and Margaret Fry. He attended Gonzaga High School where he was a member of the football team and... View Obituary & Service Information

The family of Ronald F. Fry, DDS created this Life Tributes page to make it easy to share your memories.

Send flowers to the Fry family.