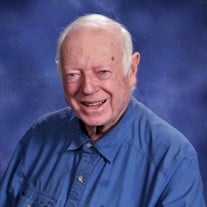 Rev. Ronald T. Woodruff, 91, of Woodstock, formerly of Huntley passed away March 9, 2020, in Highland Park. He was born Aug. 20, 1928, in Rochester, NY the son of Donald and Caroline (Rising) Woodruff. Ronald was a 1952 graduate of Union College and earned his Masters of Divinity degree from Yale Divinity School in 1955. He married Cora Dechert at the Central Presbyterian Church in Buffalo on July 30, 1955, and spent the remainder of the summer touring Europe before he began his duties at the Federated Church in Chagrin Falls, Ohio. For the next 26 years, he served as their Associate Minister, with responsibilities revolving around the church’s youth program. Many young men and women fondly remember the retreats, activities, and work camps that he led over the years as well as the profound impact that he had on their lives. In 1982 he moved to Huntley where he assumed his position as the pastor of the First Congregational Church. Upon his retirement in 2001, he and Cora moved to Woodstock and became active members of the First Congregational Church of Crystal Lake. He was very involved in Habitat for Humanity of McHenry Co. and worked on building many affordable homes for families. He also served as a Fire Chaplain in Huntley for many years, as well as remained active in the United Church of Christ in many different capacities. He is survived by his children, Brian Woodruff, David (Kim) Woodruff, and Debbie Woodruff; grandchildren, Ben Woodruff, Cody & Tyler Messick, and Madelyn Woodruff; and 2 nephews. He is preceded in death by his parents; wife, Cora on April 14, 2005; and sister, Sue Glick. Graveside Services will be at 11 am on Monday, March 16, at Oakland Cemetery, 13603 Co. Hwy 30 in Woodstock. Visitation will be on Sunday, March 15 from 2 to 5 pm at James A. O’Connor Funeral Home, 11603 E. Main St., Huntley. In lieu of flowers, memorials in his name may be directed to Habitat for Humanity of McHenry Co., PO Box 1166, McHenry, IL 60051

Rev. Ronald T. Woodruff, 91, of Woodstock, formerly of Huntley passed away March 9, 2020, in Highland Park. He was born Aug. 20, 1928, in Rochester, NY the son of Donald and Caroline (Rising) Woodruff. Ronald was a 1952 graduate of Union College... View Obituary & Service Information

The family of Rev. Ronald T. Woodruff created this Life Tributes page to make it easy to share your memories.

Send flowers to the Woodruff family.