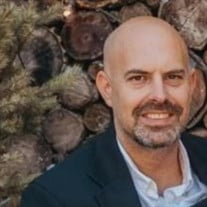 It is with great sadness that we announce the passing of our beloved husband, father, son, brother, uncle, and friend, Travis Keute. Travis was born in New Ulm, MN on August 24, 1978, to Arlyn and Lois Keute. He attended New Ulm Cathedral where he played football and ran track, and made numerous friends. He achieved his Eagle Scout award in addition to being named athlete of the year. He was loved by many during his youth, and he caused his share of mischief there, too, torturing the high school staff with his regular dress code violations and other antics. He went on to attend college, spending one year at the University of Minnesota before transferring to UMD where he graduated with a degree in economics. He spent a semester abroad in Sweden, which deepened his love for travel. Travis visited every state and just about every capital. If you had the privilege of traveling with him, you knew how he would find some historic landmark or event to visit, unique or otherwise, a fun trait he learned from his parents while growing up. Travis worked as a pricing and revenue analyst for Sun Country and Independence Air. He frequently helped friends and family travel with his perks. He then worked as a purchasing agent for SMDC in Duluth, where he met and fell in love with his devoted wife, Christine LeBrun. They started their relationship by raising their two cherished dogs, Maggie and Griffin. Maggie was always by his side. The couple lived in the Chicagoland area, and he worked as an analyst for Owens and Minor and later became a Director of Logistics at Medline Industries, where he grew a team of colleagues and friends who thoughtfully helped supply hospitals throughout the United States with necessary medical equipment. Travel became a shared love for Travis and Christine and their favorite trips were to Turks & Caicos, Greece, and Hawaii. Travis and Christine created a sweet family with the births of their children, Avery (Pokie), Brooke (Brooke Cooke), and Connor (ConCon). Travis loved his children so much and introduced them to fishing, hunting, rock music, a love of nature and the outdoors, the Minnesota Vikings, and the Chicago Blackhawks. He was the comedian of the family, always telling cheesy dad jokes, making kids and adults alike laugh. Seinfeld was a shared loved for the couple, so much so that they attended a Seinfeld show on the day they got married. Travis had a fierce love of music. He loved to dance with the kids and music was the backdrop of their daily life. Travis had a gentle, kind, faithful, and sweet spirit. He regularly checked in on his family and had a very special bond with his mom, dad and sisters. He regularly referred to his parents as the “best parents in the whole world.” Almost daily he checked in on his nephews and nieces with funny texts, phone calls, and visits. He was so loved by many and was always good for a kind word and a listening ear. Travis was very affectionate with his family. He constantly told Christine how beautiful she was and wrote her sweet love notes. He showed love with his actions and his words and told Christine and his kids he loved them every day. Travis is survived by his wife, Christine; children, Avery, Brooke, and Connor of Huntley, IL; his parents, Arlyn and Lois Keute of New Ulm, MN; sisters, Amanda (Andy) Christensen of New Ulm, MN, Krisa Keute of Duluth, MN; nieces, Abby, Emma, Elle; and nephews, Cole, Ian, and Marley; mother-in-law, Carole Richard; father-in-law, Pierre-Richard LeBrun; and numerous cousins, aunts, and uncles. He is preceded in death by his grandparents, Elmer and Loretta Hesse, Delores and Roland Keute; and infant brother, Arlyn. A Memorial Mass of Christian Burial will be celebrated at 11 AM on Friday, April 29 at St. Mary Catholic Church, 10307 Dundee Rd. in Huntley. Mass will be live-streamed and can be accessed by clicking on the Photos and Videos on Travis's obituary and then hitting play at the time of service. Due to technical difficulties the mass is being recorded and will be posted after. Visitation will be at the church prior to Mass from 10 - 10:50 AM. In lieu of flowers, please consider a contribution to a fund designated for Travis’ children who he loved dearly: C/O Penny Lewis, Bell Bank, 201 E. Superior Street, Duluth, MN 55802; [email protected]

It is with great sadness that we announce the passing of our beloved husband, father, son, brother, uncle, and friend, Travis Keute. Travis was born in New Ulm, MN on August 24, 1978, to Arlyn and Lois Keute. He attended New Ulm Cathedral... View Obituary & Service Information

The family of Travis L. Keute created this Life Tributes page to make it easy to share your memories.

It is with great sadness that we announce the passing of our...

Send flowers to the Keute family.