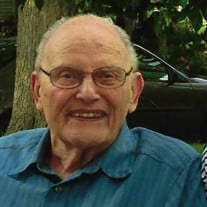 William A. Carter, Sr., 92, of Huntley passed away early Wednesday morning, Jan. 20, 2021, at Northwest Community Hospital in Arlington Heights. He was born April 1, 1928, in Chicago the son of Harold and Gertrude (Bonneau) Carter. William was a 1945 graduate of Lane Tech and married Esther Liebich in Chicago on Sept. 25, 1948. He was employed for 40 years with Illinois Bell retiring in 1989. William was a member of St. Mary Catholic Church in Huntley, and the Telephone Pioneers of America. After Esther’s passing in June of 1993, he then married Marilyn Harbacek on Oct. 13, 2000. William loved photography & traveling, but most of all his family. He is survived by his wife, Marilyn; sons, Ronald C. (Joan), and Kenneth A. Carter; 3 grandchildren, Carol (Pete) Sutter, Tera & Molly Carter; 6 stepchildren, 12 step-grandchildren; and 6 step-great-grandchildren. He is preceded in death by his parents; 1st wife, Esther; son, William Carter, Jr.; and 8 brothers and sisters. Mass of Christian Burial will be held at 1:30 PM on Tues. Jan. 26 at St. Mary Catholic Church, 10307 Dundee Rd., Huntley. Following cremation, the Inurnment of ashes will be at Acacia Park Cemetery in Norridge. Click on the link below under the media section to watch the mass live at 1:30 PM Visitation will be prior to services at the James A. O’Connor Funeral Home, 11603 E. Main St, Huntley from 10 – 1 PM. Masks and Social distancing will be in place. In lieu of flowers, memorials in his name may be directed to St. Mary’s for masses.

The family of William A. Carter Sr. created this Life Tributes page to make it easy to share your memories.

William A. Carter, Sr., 92, of Huntley passed away early Wednesday...

Send flowers to the Carter family.