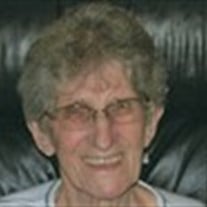 Zuzanna, also known as Susan (Ficek) Serwanski, 87, of Huntley passed away Friday, Aug. 11, 2017 in her home. She was born on August 14, 1929 to the late Jozef and Maria (Kolat) Ficek in Slovakia.  She married Edwin in Sobolice, Poland on January 30, 1949. Zuzanna lived near Edwin and went to school with him in Jasenovce, Slovakia. She lived a hard life, being forced to leave her home with her family in 1943 when the war front of WWII came to their area. They returned in 1944 to find the Germans burned down homes in their village up to and including Zuzanna's house. In 1948, the Polish government moved Edwin and Zuzanna's families to Poland to homes previously occupied by Germans. After their marriage in 1949 they moved into Edwin's home with his sister, Lorka, and started their family in 1950. There wasn't much work in Poland other than lumber/forestry. Zuzanna worked extremely hard in the fields with the help of neighbors, but other food was scarce. With the help of Edwin's two sisters and brother and their spouses, Zuzanna and Edwin decided to come to America so that their daughters could have a better life than they had. In America both worked hard in factories to make a comfortable life for their family. Zuzanna thoroughly enjoyed sewing, gardening, and took great pride in her flower gardens. All who knew Zuzanna will miss their conversations with her, listening to her share her memories, and listening to her sing the many, many Polish and Slovakian songs she remembered, and her ability to make us laugh! Thank you Zuzanna/Susan/Sue/Busia/Pra Busia for enriching our lives!  She was preceded in death by her husband, Edwin Serwanski; sisters, Mary Kulicz, Karolka Holota; half-sister, Anna; and half-brother, John Ficek.  Suzanna deeply loved her daughters, Veronica (the late Jim) Kroll, Helen (Casey) Marek, Maria (Jim Phillips) Wojciechowski, Harriet (James) Bidle. She was the proud "Busia" of 10 grandchildren and their spouses, Jamie (Robert) Ekhart, Doreen (Dave) Lambert, James (Marta) Peliwo, Paulette (Michael) Jozwiak, Jason (Laura) Peliwo, Kirk (Maria) Bidle, Gregory (Natasha) Wojciechowski, Christopher (Jana) Bidle, and the late, Steven and Jeffrey Wojciechowski. She was also the proud "Pra Busia" of 14 great grandchildren, Robert, Samantha and Jessica Ekhart, Jeric and Jacelyn Lambert, Marissa and Kyle Jozwiak, Lucas Peliwo, Brayden and Brielle Bidle, Faith, Steven and Ivan Wojciechowski, and Stella Bidle. Zuzanna also was the dear aunt of, Joseph Kulicz, Eva Podumis, Stan and Edwin Garb, Terri McMannus, Joseph Knaga, and Martha Wisniewski here in the United States as well as having many loving nieces and nephews in Poland.  The Mass of Christian Burial will be at 10am Thursday, Aug. 17 at St. Mary Catholic Church, 10307 Dundee Rd. in Huntley. Burial will follow in Resurrection Cemetery in Justice, IL.  Visitation will be from 3 to 8pm on Wednesday, Aug. 16 at James A. O'Connor Funeral Home, 11603 E. Main St. in Huntley, with a wake service at 7:45pm. Visitation will continue at the church on Thursday prior to the mass from 9 to 9:45am.

Zuzanna, also known as Susan (Ficek) Serwanski, 87, of Huntley passed away Friday, Aug. 11, 2017 in her home. She was born on August 14, 1929 to the late Jozef and Maria (Kolat) Ficek in Slovakia.  She married Edwin in Sobolice, Poland on... View Obituary & Service Information

The family of Zuzanna Serwanski created this Life Tributes page to make it easy to share your memories.

Send flowers to the family.